Philip (l.) and Julius (r.) Epstein - the twin brothers who wrote the screenplay for Casablanca - the subject of Leslie Epstein's new novel. 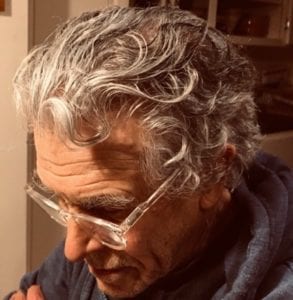 University of New Mexico Press will launch a new imprint, High Road Books, with the publication of Leslie Epstein’s 12th novel, Hill of Beans: A Novel of War and Celluloid. Epstein – whose father Philip and uncle Julius were the screenwriters of Casablanca ­– chronicles the making of the film, as Jack Warner engineers an improbable publicity stunt: the invasion of North Africa by British and American forces to coincide with the film’s release. Epstein was the longtime director of the Creative Writing Program at Boston University, where his students included Ha Jin, Jhumpa Lahiri, and Lisa Taddeo. He answered some questions about his new novel.

The novel is incredibly energetic, full of action, flash-backs, and fast-forwards. What does your writing process look like, and how did you keep track of all the moving parts, not to mention people?

I used to write on an ancient L.C Smith & Corona, then with a Pelikan Pen, sometimes with a retractable pencil. But nowadays it’s on a computer. I am trying to get into the habit of 500 words a day. Keeping track? Slips of paper, I guess. Which I sometimes lose. And who says I keep track? Even though the novel is now in print I am still trying to sort out how Jack announces that he is going to Moscow next month when he has already been there.

Jack Warner’s legacy? Some wonderful films, of course. Some brave and daring ones. He was the only mogul who did not kowtow to Goebbels and the Nazis. None of that means he was not a terrible human being. The two–genius and decency–seem to have no discernible relationship to each other. If anything, there might be an inverse one.

The experience of reading the book truly feels like time-travel, particularly when it comes to language and tone. Could you talk about your obvious connection, both personal and professional, to old Hollywood?

The answer to this question is in my “Novel from Memory,” San Remo Drive. Bits and pieces of Hollywood came to the Fox and Lox Society around our pool on Sundays. Remember: my father and uncle were Schmucks with Typewriters, but they were unusual ones, with a zillion friends. I dropped a piece of cake on Elizabeth Taylor’s shoe. Age ten I played pool with the extremely nice Tony Curtis (I remember that on the eve of his marriage Julie and Phil sent him a telegram: “Bernala, don’t get a hernala.”) We went trick or treating at the also very nice Gregory Peck’s house. And we soaped Joseph Cotton’s windows. And so on and so forth. I’d go to Burbank now and then and play catch outside the writers bungalow and watch the filming of dive bombers going down in flames (studio aid with a fire machine, pilot’s legs dangling down from fuselage). None of it had any particular significance until I looked back on it much later–like at this minute, for instance.

(Leslie Epstein reads a short excerpt, which was published by Tablet in November 2020.)

Do you remember when you first saw Casablanca?

No, but I remember the last: at a big celebration for its anniversary at the Coolidge Corner Theater at Brookline. Julie and I were supposed to speak after the showing. The minute the lights went down and the Voice-Over started saying, “With the coming of the Second World War…” my uncle nudged me with his elbow. “Frozen yogurt,” he whispered. And we snuck out to J.P. Licks for the next two hours.

Perhaps in some way I’ve always been writing this novel.

Your uncle Julius outlived your father by half a century – are his memories and stories reflected in your novel?  Can you tell us about your father and uncle’s relationship with Jack Warner?

My father and uncle’s relationship with Jack Warner is at the heart–or perhaps nearer the lungs–of this novel and I’ll append an article I wrote about it. You’ll see that many of the stories show up in Hill of Beans. They all come from Julie because my father died when I was thirteen and I don’t remember anything he told me. Lucky me: I had a second father waiting in the wings.

This is a story that has been with you for your whole life – how has your perception of it changed over time?  Did you think about writing this novel earlier in your career?

My earlier novel Pandaemonium might be a dress rehearsal for this one. Julie and Phil act as a sort of Jewish Greek chorus there. Perhaps in some way I’ve always been writing this novel.

Some readers may find it difficult to be confronted with depictions of racism, misogyny, and abuses of power that were characteristic of the era—what does it help us understand about these men and the time?

That question, it seems to me, answers itself. I tried to write in the same language, which reflected the same attitudes, that the characters possessed at the time. To do anything else would be to lie. People who are offended by it lack an imagination for history. They had better be careful because–just look around you–history tends to repeat.

What do you think is Jack Warner’s most important legacy?

Jack Warner’s legacy? Some wonderful films, of course. Some brave and daring ones. He was the only mogul who did not kowtow to Goebbels and the Nazis. None of that means he was not a terrible human being. The two–genius and decency–seem to have no discernible relationship to each other. If anything, there might be an inverse one.

What are some of your favorite lines from Casablanca?

Favorite lines? Just look in Bartlett’s. Least favorite? “A franc for your thoughts.” Because Phil and Julie did not write it.

Leslie Epstein is an award-winning author who has written eleven other books of fiction, including the celebrated novels San Remo Drive and King of the Jews. He teaches at Boston University, where he directed the Creative Writing Program for thirty-six years.